From addiction, prison and sleeping in a school bus to store manager: ‘Life makes sense now’

From addiction, prison and sleeping in a school bus to store manager: ‘Life makes sense now’

The first night after he was released from prison, Michael Blanton found himself sleeping in the back of an unlocked school bus, unsure of what to do next.

His time as an inmate at the Livingston Parish Detention Center had transformed him, from a man lost in the throes of opioid addiction to a survivor filled with deep faith.

Free at last, he felt called to something greater, but there were some immediate challenges.

“I had nowhere to go, nobody to call,” he said. “I remember just praying in the back of that bus going, ‘Lord, I know this is not what you’ve saved me [for].'”

Blanton eventually found lodging at the St. Vincent de Paul homeless shelter in Baton Rouge and later a transitional home. But visiting the Goodwill on College Drive is what changed his life. 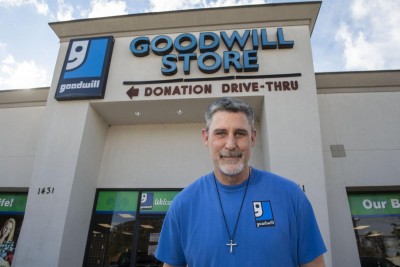 A shelter tip had already led him to the Goodwill Re-Integration Program, which helped him obtain a bus pass, a driver’s license and a newly edited resume. By the time he arrived at the College Drive Goodwill store with a voucher to purchase clothes, he had already sent out more than 100 job applications with no response.

This time, however, he made it through the interview process and started as a doorman for the Goodwill making $8 an hour.

“Michael established himself as someone who arrives on time, works every shift as scheduled, and he built a rapport with anyone he encountered,” Goodwill said in a news release.

Just three months later he was promoted to “key holder,” a trusted position in the store, and soon after that to assistant manager. In January 2021, Blanton was promoted to manager and assigned to the Goodwill location in Denham Springs.

This October marks two years since he was released from prison. Blanton now owns a car, rents an apartment and leads a staff of 14 people. He was even named Goodwill Industries International’s 2021 Achiever of the Year for his progress.

“You know, before there was no hope,” Blanton said. “Every night I would lay down and just ask God not to let me die. Now, I can lay down every night and go, ‘If you want to take me, take me. I’m good.’ But I wake up every morning grateful for every single day that I have. Life makes sense now.”

Blanton was arrested in November 2015 and eventually convicted on three counts of heroin possession and one count of aggravated flight from an officer. The story of how he arrived in prison, emaciated and hooked on heroin, charts the weary cycle of the opioid epidemic that has devastated much of the country over the last decade.

Although Blanton began drinking beer and smoking marijuana when he was still a teenager, it was a broken shoulder blade that introduced him to powerful painkillers. A doctor prescribed oxycodone after Blanton received an MRI, and Blanton was soon addicted.

Eventually, Blanton found pain medication harder to come by, and he turned to heroin because it was “better and cheaper.”

“I knew I was making poor choice after poor choice, I just couldn’t get out of it,” he said. “It was like I was stuck in quicksand. I could feel it pulling me down.”

Suddenly, everyone he knew was doing heroin. Blanton, who currently stands 6 feet four inches tall and weighs 220 pounds, shrank to 140 pounds while battling his addiction.

“The last time [my momma] saw me before I went to jail, she told me not too long ago, with tears in her eyes, ‘Baby, when you left, I looked at your daddy and said, that’s not our Michael,'” he said.

Most of his friends and acquaintances he knew during that time have died of an overdose. When Blanton finally arrived at the Livingston Parish Detention Center, he had hit rock bottom.

Just a few months later, on Jan. 17, 2016, he remembers lying awake and reading the Bible in the early hours of the morning, unable to sleep. A particular verse stood out to him. He prayed.

From that moment on, his addiction subsided. He began to attend Bible study and eventually led the nightly class for three years. After taking every course available to him for “good time,” he had months knocked off his 5 year sentence.

He spent most of his time at the Livingston facility with brief trips to other prisons during the 2016 flood. There, he said even the guards called him “preacher man.”

A spokesperson for the Livingston Parish Sheriff’s office said Blanton had no disciplinary issues while incarcerated and completed the discipleship religious class.

After serving just shy of 4 years, Blanton was released in October 2019.

He takes pride in managing the Denham store, where he organizes the clothing by color: “It runs like a rainbow.”

“I keep my floors clean,” he said. “We don’t put bad clothing on the floor. We wipe stuff, we clean stuff. I want it to be, ‘I would buy that. I would pay that price for it.’ That’s how I determine how I do what I do.”

When he can, he shares his story with people at the register. It feels like a calling, telling his story and letting people know about Goodwill programs their purchases fund. He lives his faith.

“It’s not a matter of something I choose to do — it’s who I am,” he said. “You can’t really separate it from me now.”

Blanton says when his mother looks at him now, she tells him, “‘You’re back.’”

On Jan. 17, 2022 — the same date that several years earlier he prayed in a cell to live a better life — Blanton will mark one year as manager of the Denham store.